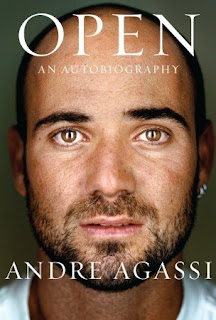 I am reading Andre Agassi's memoir. It is compelling. It all starts with his fractured relationship with his dad. The further I get into the book, the more I am convinced he could be one of my clients. I haven't finished it so I do not know if there is any kind of resolution between Andre and his demanding, controlling and unaffectionate dad, but thus far in the book, he looks for a caring, compassionate, loving father figure in anyone who has the potential. And when he does find those characteristics in a surrogate, it is like manna from heaven to him.
I work with pastors, most of them dealing with sexual addiction issues, which is the symptom of the real problem. And with practically every man I work with, there is a dad wound, a void. It is always part of my treatment plan to explore the client's relationships with his parents, especially his dad, because behind the walls of the house they grew up in lies at least part of the answer to why they are stuggling today.
I ask them to tell me about their dad and almost all of them start with some sort of family loyalty statement: He was a good man, a hard worker, etc.. I'm glad they have that impression of him and that they want to honor him. However, at this juncture in our journey together, it doesn't serve our immediate purpose. We're trying to find the cracks, the negative impressions, the wounds that have contributed to pornography use or habitual masturbation or an affair and beyond. I tell them this is not about blame, it is not about bitterness, and it is not about dishonoring their fathers in any way. It is about that little boy getting to receive healing around the wounds that were inflicted on him regardless of how hard working and honorable his father was. Honor, respect, and feeling pain from the past can co-exist but usually that very honor and respect keeps men from getting in touch with that pain because they don't want to feel like they're betraying their father and are still seeking his approval. Numbed pain gets treated someway, somehow.
Habitual use of pornography is not just about sexual perversion, it is about medicating pain. I walk the path to the past with each man I work with to see as specifically as we can what was inflicted at such a young age that they would feel the need to secretly behave in a way that is contrary to their morals, belief systems, and their marriage vows. And there's always some sort of fracture, yet it got numbed, stuffed, because as kids, all we're trying to do is survive whether we have the proper tools to be healthy about it or not. If we don't have them, we'll come up with them. But we were just kids, so our tools are crude and ineffective for the long term. That's why a boy needs a dad to show him the way, but if Dad wasn't present to guide him or was actually the source of pain or sent a perpetual harmful message,  the boy has to find alternate ways to cope and survive.
Many men struggle with pornography because in their fantasy they can be as manly as they need to feel. It is a dad's job to teach his son how to be a man, what a true man is. If he didn't do his job and was actually counterproductive, this void can be filled by fantasy and pornography when someone's sense of manhood takes a hit. Temptation to act out sexually and immorally is actually a pain flare up. But that pain has been covered up. Men are so out of touch with that pain that they just go for medication, the porn, the fantasy, the escort, the affair partner, whatever meets that topical need because in that moment, they can feel as manly as they need to feel. For many, I see their unhealthy choices as the result of a little boy looking for his dad.
G. K Chesterton once said, "Every man who knocks on the door of a brothel is looking for God." I've seen that played out in the lives of the men who sit on my couch in my office or that I Skype with. There is an unmet need, a gaping wound with a band-aid on it, and the pain has been quickly medicated by sexually acting out but never really treated for what it is or healed, thus a cyclical, habitual pattern of sinful behavior continues.
The great news is God is there to heal the wounds, fill the voids, and ease the pain. But do you know what that pain is or where it is coming from? I hear Jesus asking the blind beggar, "What is it you want me to do for you?" And the afflicted man told him exactly what he wanted healing for with no generalities.
Maybe you don't know exactly what it is that's causing you pain so you can't be as specific, but I believe Jesus is there to touch that precise area in your soul that has been wounded for far too long. I hope you'll look for your Father in the right places. There is so much hope.